I didn’t realize that the style of clothing became an important part of culture in the 1950s, so last week when I came across some old family pictures of my grandma, it inspired me to blog about how significant fashion was and what it meant during that time.

The women in these photos demonstrated such style which back then showcased one’s place in society.  In the picture to the left is my great Aunt Yolanda, who is wearing a pleated skirt that has circled around several times within fashion.  Her fitted blazer with piping that matches the gingham pattern in her skirt creates this classy look.  During this era, women’s fashion exploded and those were the styles of that era.

These dresses were showing off intricate gatherings, a multitude of pleats, poofy petticoats, and fabulous collars, all made of the best taffeta, nylon, rayon, wool and leather in the brightest and boldest patterns and colors.   In the middle, is a family friend and who appears to be a full-figured woman and during that time women were sold clothes for certain body shapes that would fit them best.  She is wearing a dress with no waistline, often referred to as a “sack “dress.  Her dress has this allover pattern (florals) that was frequently seen during this time. 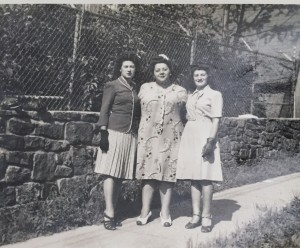 On the right, is my grandma Marsico.  I just love her in this full skirt that is cinched in at the waist to give her a feminine hourglass look.  She has pared it with a fitted short sleeve collard top which was also a popular style during that time.

Gloves were worn everywhere in the 1950s and completed a woman’s grooming.  Without gloves she was not properly accessorized.  My grandmother and her sister are wearing black short gloves which where only worn during the day.   Long, elbow length gloves appeared for formal and evening wear with short sleeved dresses or strapless gowns. A well-dressed woman wore gloves and a hat outside the home for all but the most casual occasions.

So the next you’re looking through some old family photos or just your own look at what you’re wearing and see how significant your style was during that time!!!

Mixing prints and patterns!! It’s a bold and fashionable way…